For the Huichol who live in Mexico and call themselves Wixáritari (Huichol pronunciation: /wiˈraɾitaɾi/), life and religion are intertwined.  Their deities are honored in their ceremonies and represented in their art and are part of daily life.  They ask the deities for rain and sun for the crops, successful deer hunts, healthy children and protection from natural and supernatural dangers.  Here we introduce Father Sun and Mother Eagle and show them in Huichol art pieces.

The Huichols believe Tayaupa gives warmth and light and power to every living thing and guarantees healthy crops and life.  His wife is Werika Wimari, Mother Eagle, mother of the sky and goddess of all living things.  The holy trinity of Peyote, Deer and Corn descend from Father Sun.  Tayaupa is seen in the design below, taken from a yarn painting by Fidencio Benitez.

Here is the artist’s description:

Tatawari, the ancient fire god, appointed the Sun to govern the Earth.  Tayaupa, the Sun, assigned four deer deities to this duty: Kauyumarie, the East, Ushikuikame, the South, Watemukame, the West and Narihuame in the north (four figures with antlers in the upper half of the circle).  Through a hole drilled in a stone disc, set in the wall of the temple, Tayaupa looks at the world and his rays enter the temple and bring fertility to all the people. (End artist’s description)

Every year the Huichol pilgrims travel to the eastern desert which they call Wirikuta, where the Sun was born, to collect the sacred peyote cactus “hikuri” which is the embodiment of the deer and with the use of it in many ceremonies the well being of all the people and the animals is assured.

(The design taken from the art described above adorns t shirts created and printed by a family in Puerto Vallarta.  Clicking on the picture below takes you to them in our store.  The Huichols themselves love to get the shirts and give them as gifts to friends and family members.) 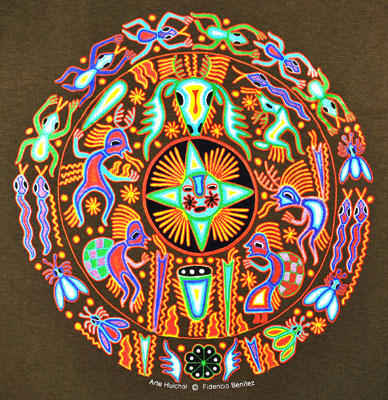 Werika Wimari is the goddess wife of Tayaupa.  She is the Eagle, Mother of the Sky, Queen of the Heavens and goddess of all living things.  She also represents the communication bridge between god and men.  Eagles themselves are important to the Huichol because their feathers impart power to the shaman, who are called mara’akame.  They create muwieries (sacred prayer arrows) using eagle or hawk feathers.  Without them they would not have power.  The shaman uses the muwieries in his or her rituals.  Here is a nierika, or yarn painting which features an eagle, corn, peyote deer, snake among other sacred symbols. 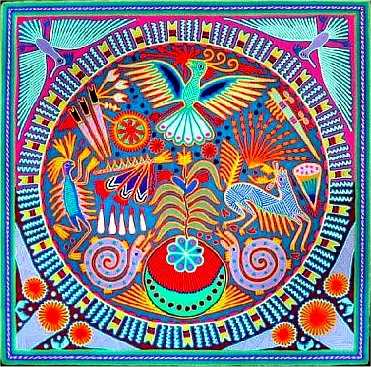 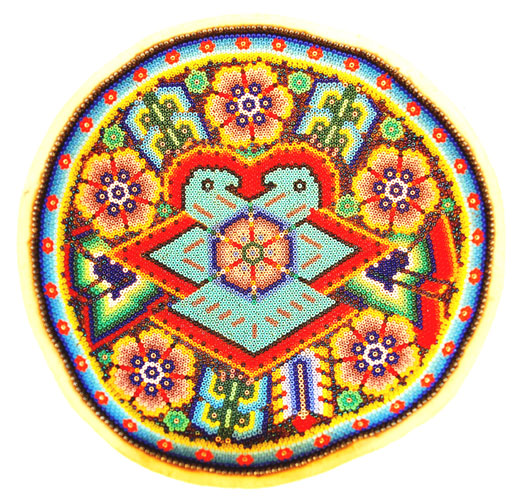 We continue describing other gods, deities and sacred symbols in coming posts.