For the Huichol, who call themselves Wixárika, their religious life and physical life are the same; life and religion are intertwined.  Their deities are honored in their ceremonies and represented in their art; and so are included in the daily interactions of life.  They ask the deities for rain and sun for the crops, successful deer hunts, healthy children and protection from natural and supernatural dangers. The oldest gods are Takutsi Nakawé, Grandmother of Growth and Germination, who created the world, Tatewari, Grandfather Fire and Kauyamari, the Deer Spirit. The Huichol are said to have over 100 deities which include sun, rain, wind, ocean, earth, and corn.  Their art manifests the deities as motifs in the work.  As you can imagine, with so many deities, their art overflows with them!

Here we explore the Huichol’s oldest gods and goddesses and show their manifestations in Huichol works of art.  These can include their very detailed embroidery, gourd bowls, masks, jewelry, face painting, yarn paintings, ceremonial pieces and more.  In later posts we will continue illustrating the many deities and motifs in their art.  According to ancient traditions the gods brought offerings or votives with them when they came from the chaotic sky world into the new world.  The votives, or sacred art, must be replenished to maintain the world.  This is why the creation of the Huichol art is so central to their lives.

Peyote (called Hikuri), which is a desert cactus, plays a central role in Huichol life.  It’s halocenogenic properties allow communication with the gods through colorful, amazing visions.  These visions are often captured in the art.  Peyote is considered a sacred gift for which they make pilgrimages each year in order to collect it in Wirikuta. 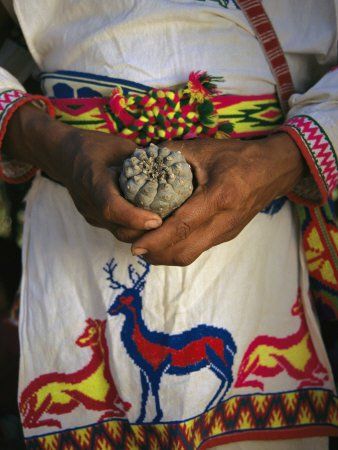 In this yarn art piece by Jose Benitez Sanchez the gods are welcoming the “nierica” (mandala) of fire. They surround it and greet it.  A “nierica” is a circular entrance to another world.

The Huichol say the sacred fire is called Tatewari – he is the shaman of ancient times, the patron of all shamans: he is the one that burns the fields ready for planting corn, who cooks our food, who helps us to hunt deer and he is the peyote. 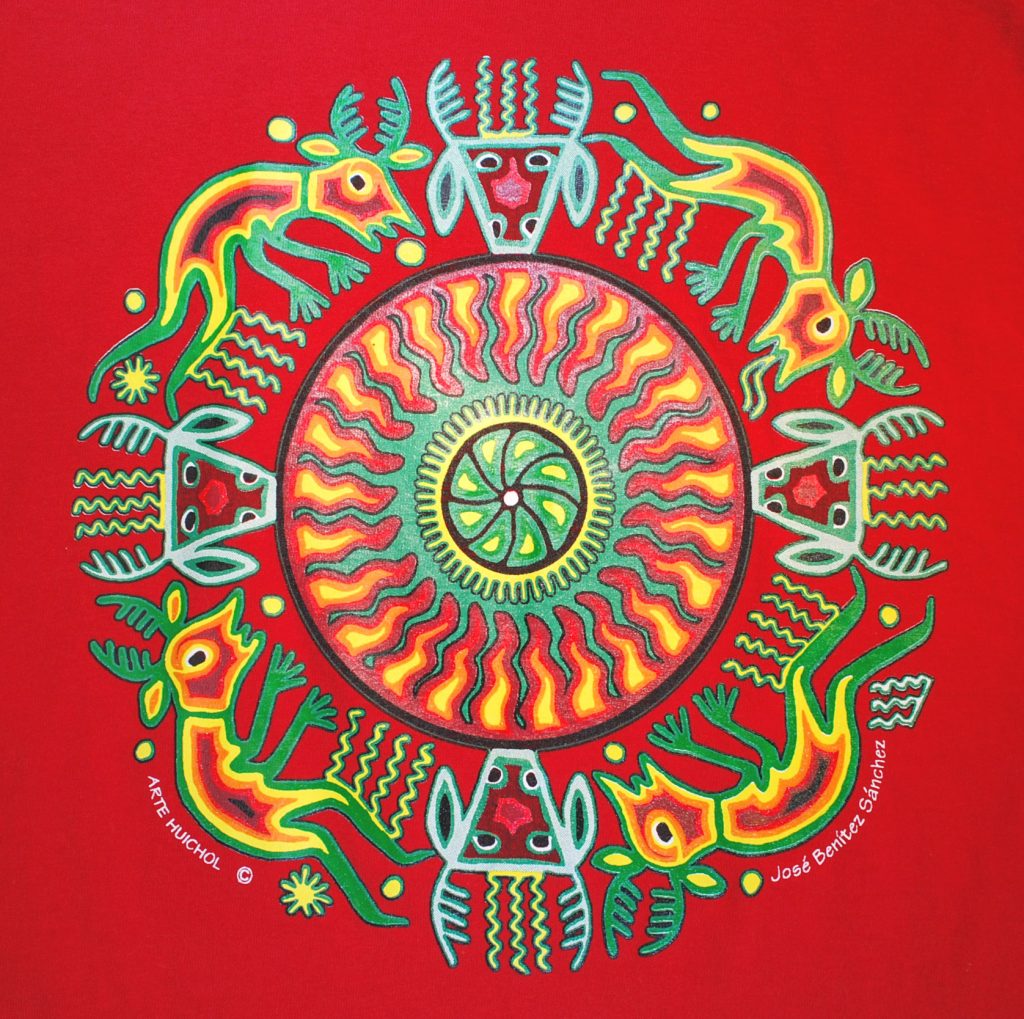 Takutsi Nakawé, Grandmother of Growth and Germination, who created the world

Takutsi Nakawe came through the tunnel of light from the chaotic sky world with the other gods and goddesses.  The sun, moon, stars, animals and the landscape are created.  Afterward, Watakame, a lonely man who works everyday on his milpa (rural place he lives), realizes that the trees he has cut down are again standing.  He finds Takutsi Nakawe, who has stood them upright with her cane, and she tells him of the coming flood.  They build a boat in which they are saved from the flood.  This yarn painting captures the great flood where Takutsi Nakawe and Watakame are saved from the flood, along with his black female dog, Tusi.  She gives him seeds to keep safe until the waters recede.  After the flood, Takutsi Nakawe recreates the plants, animals and trees. She shows Watakame how to plant the seeds.  Watakame and Tusi, who has turned into a woman, marry and have children that are the Huichols, or Wixáritari. 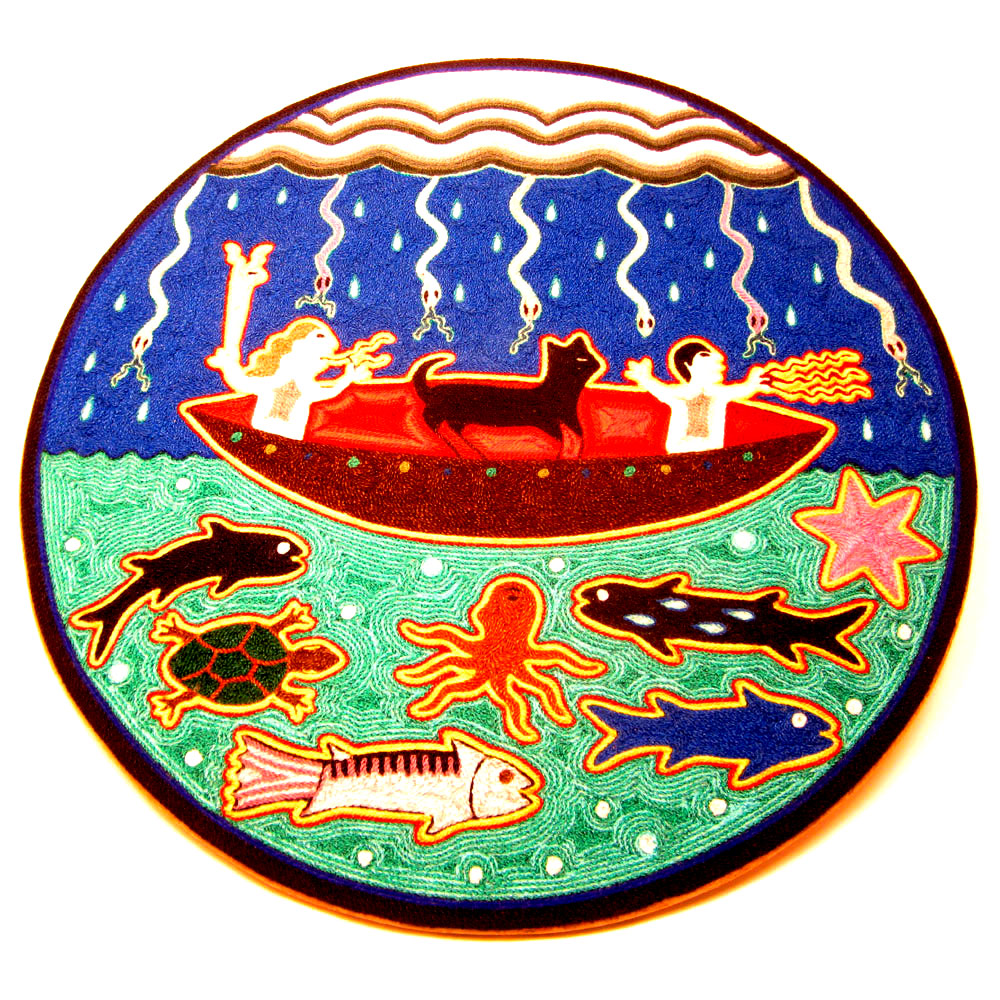 In the Huichol creation story, Kauyumari, the Deer Spirit, led the other gods and goddesses through a tunnel of light leading to this world from the chaotic sky world.  Kauyumari left green disks on the desert floor, which are the peyote.  The gods learned that if they could perform the proper rituals and ingest the peyote it would fill them with Kupuri, divine light, so they could see their way in the new world and remember where they had come.  Kauyumari also left peyote trailing from the tunnel of light for those who came through so that they could make their way to the center of the new world. 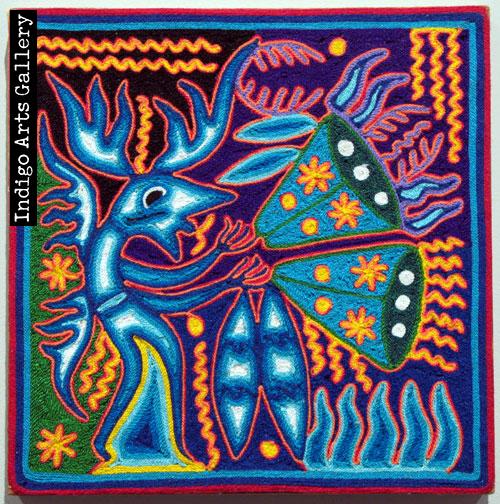 Cosas Bonitas Oregon is rebranding as Latin American Art Gallery! We think that this name change will better present the fine art that we offer and be easier for non-Spanish speaking people to remember and spell.

Our new website url is https://latinamericanart.gallery please join us there!

It’s day three of the creation of Huichol Beaded prayer bowls, or jicaras. This art is made using smaller beads, often called micro beads, that are not as available in Mexico. As a result the art is extremely detailed and amazing.   The bowls themselves are cut from the bottoms of gourds.

To see beaded bowls that are available for purchase click here where you will see a good selection, each one of them wonderful and unique.

First, the bowl is cut from the bottom of the gourd, dried thoroughly and the inside is made smooth. Then campeche, a beeswax mixture, is spread thinly on the surface of the inside of the bowl. 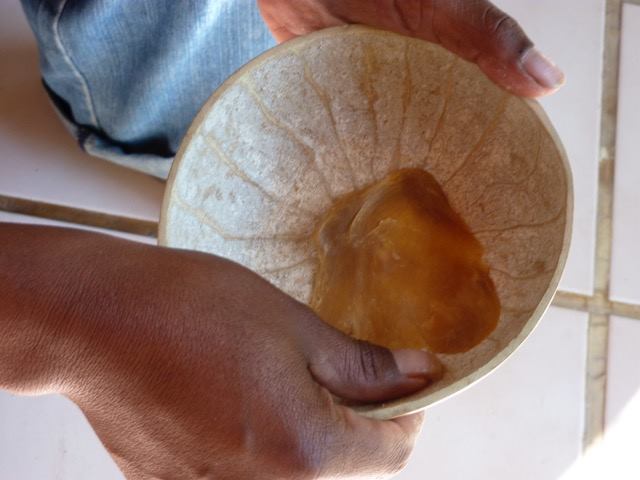 Here the beading of the bowl is begun.  The artist starts in the center by placing beads to create a wonderful star (peyote) design. The second bowl contains the start of a deer figure, deer being one of the most important symbols for the Huichol. 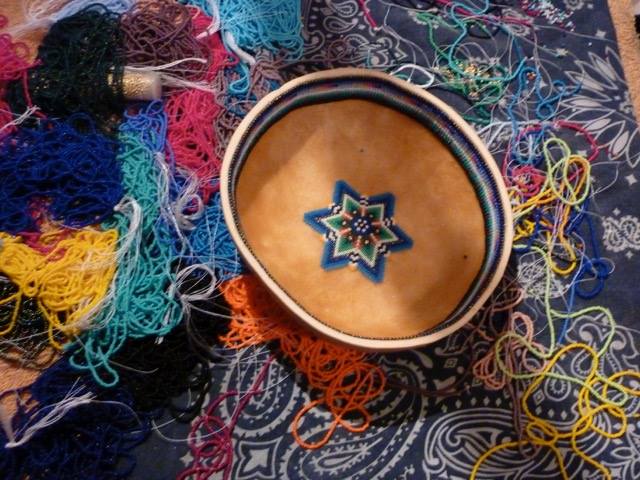 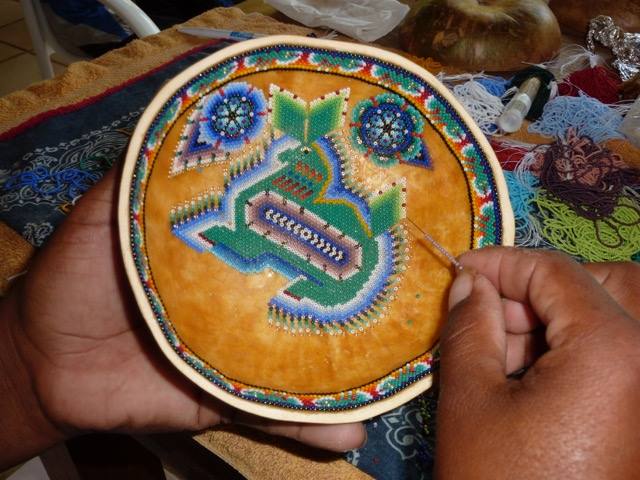 Join us tomorrow for day 4 where the beading continues.

It’s day two of the creation of Huichol Beaded prayer bowls, or jicaras. This art is made using smaller beads, often called micro beads, that are not as available in Mexico. As a result the art is extremely detailed and amazing. 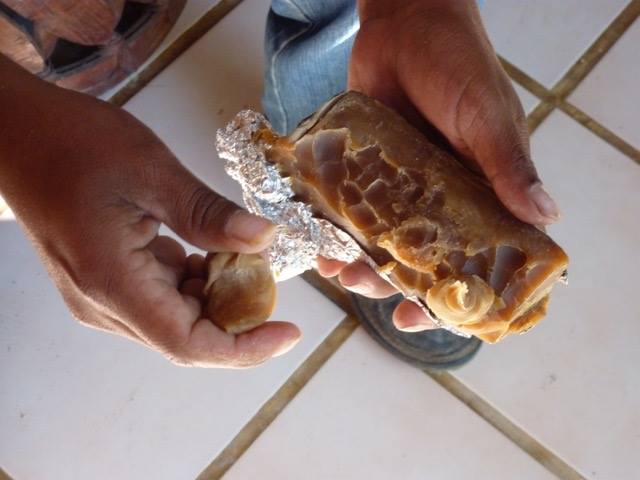 To see beaded bowls that are available for purchase click here where you will see a good selection, each one of them unique.

Here a bit of beeswax mixture, called campeche, is kneaded and spread on the surface inside the bowl to make a thin, consistent layer into which the beads will be placed.

Join us tomorrow for day 3 where the beads start being place.

We hope you enjoy this description of the making of this very amazing Huichol Indian art from Mexico. 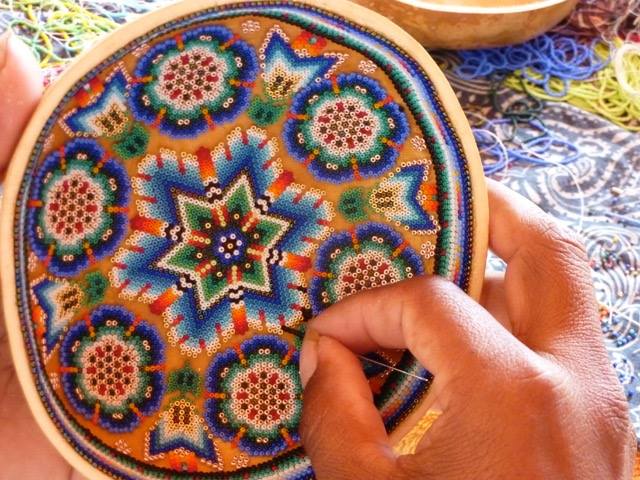 Here is a progression of the creation of Huichol Beaded Prayer Bowls, or jicaras. This art is made using smaller beads, often called micro beads, that are not so available in Mexico. As a result the art is extremely detailed and amazing. The bowls themselves are the bottoms of gourds. To see beaded bowls that are available go to https://latinamericanart.gallery/store/beaded-prayer-bowls/

First. the bowl is cut from the bottom of the gourd, dried thoroughly and the inside is made smooth. 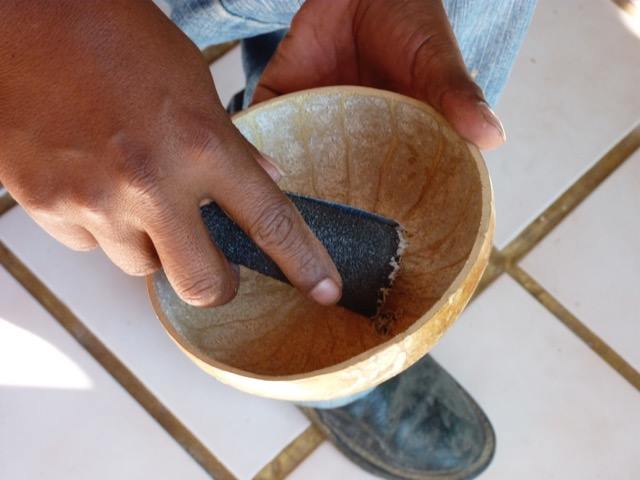 Check back tomorrow for the progression of this bowl making!